Since the 2001 September 11 terrorist attacks, the United States has declared a “War on Terror.” While this war on terror has led to positive outcomes, such as the death of Osama bin Laden and the creation of the Department of Homeland Security, other actions have led to questioning of the government’s and the president’s true constitutional powers. The actions taken by the Bush Administration in response to these attacks, chiefly the creation of the Uniting and Strengthening America by Providing Appropriate Tools Required to Intercept and Obstruct Terrorists (USA PATRIOT) Act led to a questioning of the legality of mass public surveillance. Although one’s individual and constitutional rights are infringed upon with these governmental security measures, one must consider the grand scheme of things and the future generations of our world. The Western way of life and continuation of the growing of terrorism at an unprecedented scale are not conducive for a successful future world. Thus, the United State’s government and the National Security Agency do have the authority to surveil the residents of the United States of America, as this is a protective and offensive action done to protect the United States and its citizens from the ever growing and prevalent threats of both domestic and international terrorism.

Since knowledge of the National Security Agency’s surveillance came to light, first in 2005 by the New York Times, and then again in 2013 through Edward Snowden, there has been a national outbreak of outrage directed towards the PATRIOT Act. Many Americans have spoken out about the unconstitutionality of it as well as the severity of the government’s infringement upon individual rights. The Bush administration was immediately attacked, as President Bush had seemingly gone over the checks-and-balances of the American system and executively ordered the unconstitutional surveillance of the American people. As reported by Risen and Lichtblau in the 2005 New York Times article, “Bush Lets U.S. Spy on Callers Without Courts,” government officials said, “Under a presidential order signed in 2002, the intelligence agency has monitored the international telephone calls and international e-mail messages of hundreds, perhaps thousands, of people inside the United States without warrants over the past three years in an 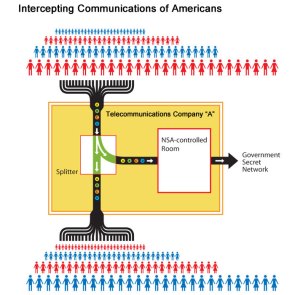 effort to track possible ‘dirty numbers’ linked to Al Qaeda.” Despite the NSA releasing information following this regarding how communications are used. The NSA info graphic on the right shows how one’s communications that re run through the government’s surveillance program. This, along with outside information regarding how one’s data is processed, clearly shows that the NSA internet surveillance program, PRISM, processes the information and only sends it on to another round of deeper examination if something troubling is flagged. However, despite this, apprehension and distrust still remains, mostly due to the government’s lack of clarity on the issue at the beginning of its creation and use. Furthermore, this secretive spying on Americans has faced strong opposition by both major political parties. Even with past measures put into place to prevent such infringement upon one’s rights, chiefly The National Security Act of 1947, which specifically prohibits domestic intelligence operations, actions contrasting these laws were nonetheless taken. However, though this surveillance, dozens of terrorist attacks, both international and domestic, have been thwarted, as testified by NSA Director General Keith B. Alexander at the June 18, 2013 House Intelligence Committee hearing.

While many believe that the government has taken unconstitutional actions, many instead believe that the world has come to a place where some sacrifices must be made for the greater good. Citing the “Country Before Self” argument, the belief is that citizens must be willing to part with their own rights that their predecessors fought for long before them in order to ensure the safety and security of their country.

As President Kennedy stated in his inaugural address, “Ask not what your country can do for you, but what you can do for your country.” This concept of country first is a value instilled in the spirit of Americans of all color and creed and thus, these government actions were taken in order to ensure the safety of the United States and its citizens.

Particularly because in the United States, with the mantra and mentality of “country before self” being so strong and prevalent throughout much of the population, surveillance is seen as a small sacrifice to ensure the safety of the American dream.

Individual rights are among the utmost important rights for American citizens, as the individual rights of man are what spurred the birth of the United States in the first place, over 200 years ago. Apart from infringement upon individual rights, other damages have caused by the surveillance, such economic loss due to tax dollars being funneled into the NSA and a lack of trust in the US government. While these are further costs of surveillance, they are minimal in the long run if they lead to a safer world. Furthermore, often cited in the argument against surveillance is Benjamin Franklin’s statement, “Those who give up essential liberty to purchase a little temporary safety deserve neither liberty nor safety.” While this quote can be effective in touting the belief that the Founding Fathers would have strenuously disagreed with this surveillance, Franklin does specify “temporary safety.” In the case of terrorism, however, the world is not fighting for temporary safety but rather to ensure the blessed continuation of life as it is currently known for generations in the future.

While mass surveillance raises the issue of the ever-growing power of the federal government, if people are truly concerned with keeping with the Founding Fathers’ ideals of a balanced, centralized government, the president and their power must be kept in check. In this day, civil rights must be more clearly defined, as the world has changed so rapidly and drastically in the past 200 years since our country’s birth. The Founding Fathers could never have thought to take something such as mass surveillance into account, and thus, suitable government actions must be more clearly outlined for the world to see. As Alexander Hamilton did specify in Article 23 of the Federalist Papers that “it is impossible to foresee or define the extent and variety of national exigencies, or the correspondent extent and variety of the means which may be necessary to satisfy them,” arguments can be made that in the case of the War on Terror, actions taken by the Bush administration were within reason of America’s founding ideals.
In the great words of President Reagan, “there should be no place on earth where terrorists can rest and train and perfect their deadly skills. I meant it. I said that we would act with others if possible to ensure that terrorists have no sanctuary anywhere.” The deadly poison that is terrorism has not yet been stamped out, but the government of America has a duty to continue on with all efforts to do so. Over the past eight years, with an overly politically correct and dodging approach to the prevalent issue, the American public has lacked a strong leader willing to stand up and condemn these horrifying actions. Thus, the lack of faith creeping in at the end of President George W. Bush’s term on the War on Terror has only continued to grow. Ultimately, until the threat of terrorism is under control, faith and trust must be placed into the hands of the government.

The fighting for the survival of the American ideal and dream in the long term is one that must be upheld, even if it means compromising certain values in the short term.